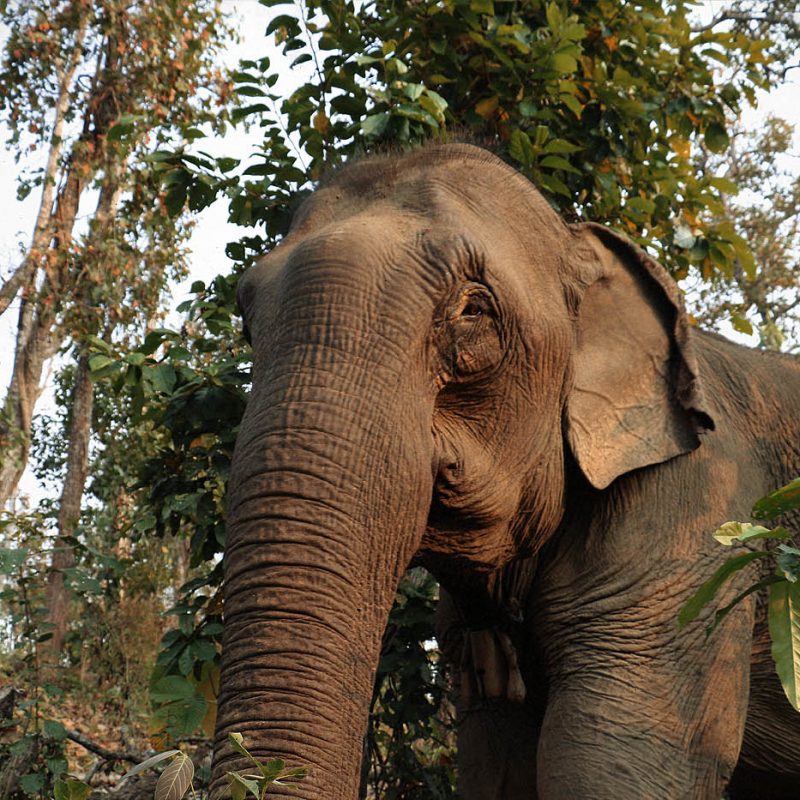 Her name means fighting spirit! She is apart of the original group of 13 elephants rescued by the Laos prime minister from an illegal trade. Mae Bounmy Noy grew up in the circus industry where she was used to preform tricks for entertainment. The training process for these elephants is very cruel. At the Elephant Conservation Center, she will be forever protected from illegal traders and circus trainers.

She is easily recognized by her floppy ears, deep cheeks, dark brown eyes and LOTS of freckles. She will be 40 this year! Known for his long magnificent tusks, Thong Khoun is one of the most distinguishable elephants at the conservation center. Thong Khoun is calm, and can be found walking peacefully through the jungles at the center, but should never be trifled with. Other than his mahout, no one is allowed physical contact with him. Like many rescued elephants, Thong Khoun was used for work in the logging industry, were he was likely beaten and abused. He, along with Boun Pheng, worked in the logging industry for many years before arriving at the center in 2018. Here, he will live out the rest of his days in peace. 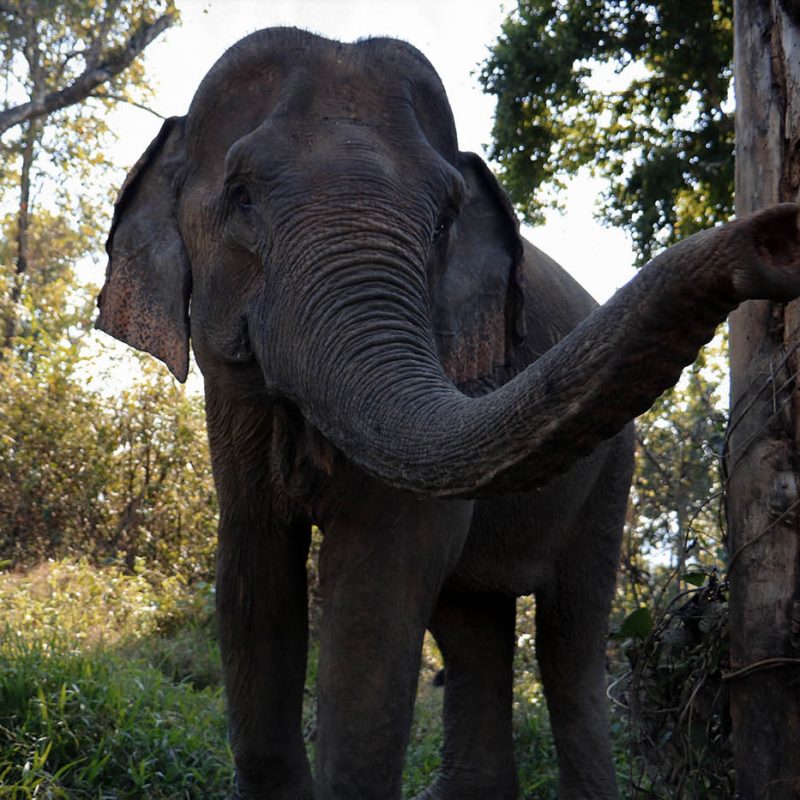 Mae Khoun grew up in isolation from other elephants most of her life. Though her previous owner used her for logging, she arrived at the center in 2014 in very good condition. Her owner was very thankful for the work she did for his family, so he gave her to the conservation center to live out the rest of her days in peace.

Mae Khoun is tall in size, but very shy. The mahouts call her "Lonely Soul". She is slowly working on making friends at the conservation center, but making progress. Recently she made friends with Mae Bounmy, Mae Boun Nam and Suriya, who she spends most of her time with during enrichment. 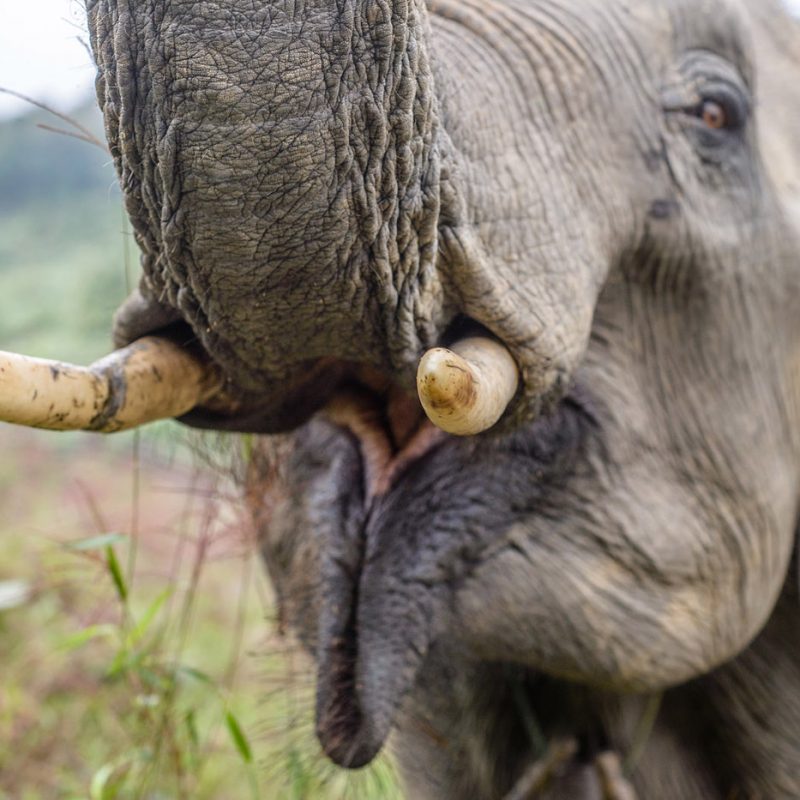 Suriya was only one month old when he arrived at the ECC with his mother, Mae Ven. Suriya earned his name ("sun ray") when the mahouts found him picking sugar cane in a sunlit field. He is curious, and full of spunk! Suriya can usually be found playing with the other two juveniles, Dor Khoun Meuang and Noy, or in the heard with his mother and aunties.

Being the first calf to arrive at the center, he has grown up fearless and can be a bit of a trouble maker on occasion...There is high hopes for Suriya to become a breeding male. He is in great health and displays many desirable traits for herd leadership; but for now, he will need to listen to his mother and the mahouts, who are teaching him everything he needs to know about being a gentleman. 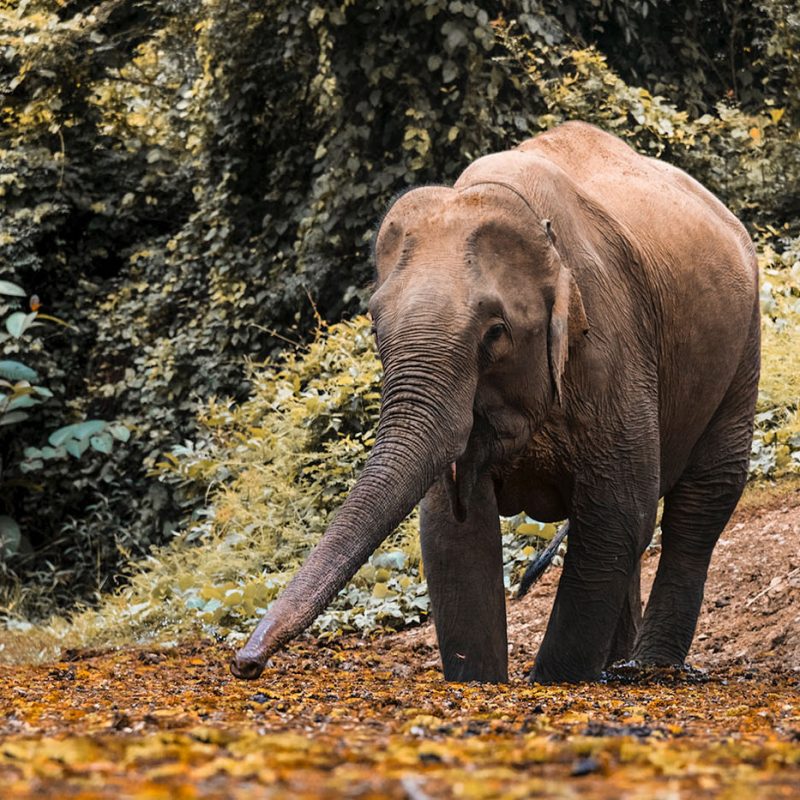 Mae Kham is calm, submissive, and doesn't like to swim-hence the long reaching trunk in the picture! She was only employed in the logging industry for 6 years before she became pregnant. According to her previous owner, she must have found a wild male in the forest somewhere near her village. After becoming pregnant, she was forced to retire form the logging industry where she began her journey to the Elephant Conservation Center. The mahouts say that she and her newborn calf walked all the way to the ECC.

The staff at the EEC have been working hard to integrate her and her calf with the rest of the herd. The hope is that the re-herding program is successful and she raises many more calves! 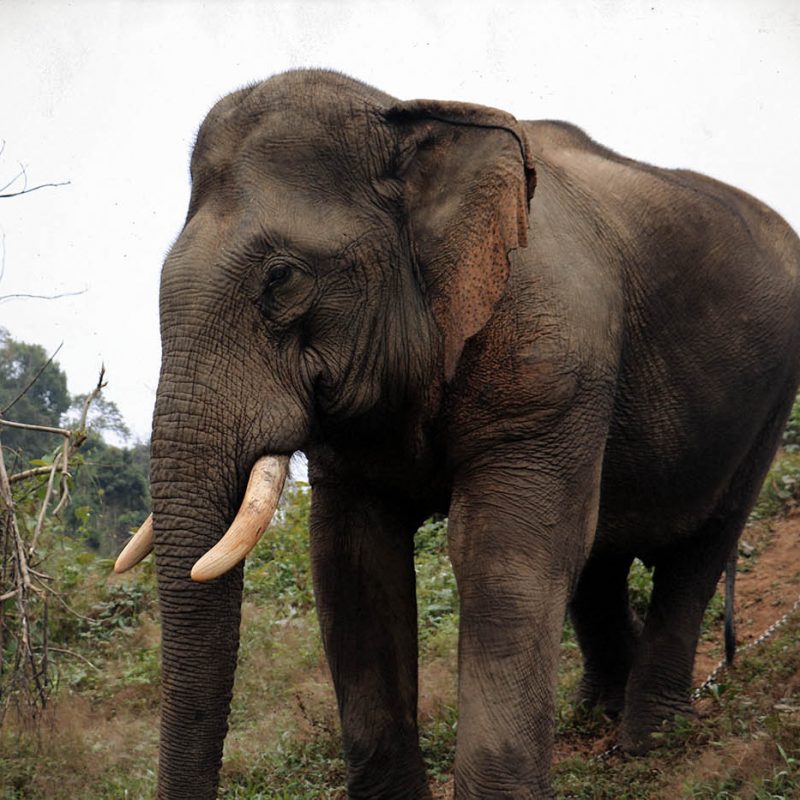 Xayo is one of the largest Elephants at the ECC, weighing in at 3467kg (over 7,000lbs)! For such a big bull, Xayo is known to be quite shy. His shyness also makes him unpredictable.

He arrived at the ECC in 2018 with a very strong temper. Like most elephants used for logging, he grew up in isolation from other elephants. The staff believe that this is the reason he is prone to musth around females at the park. He now spends most of his time with the other males, and has become good friends with the senior bull Thong Khoun. 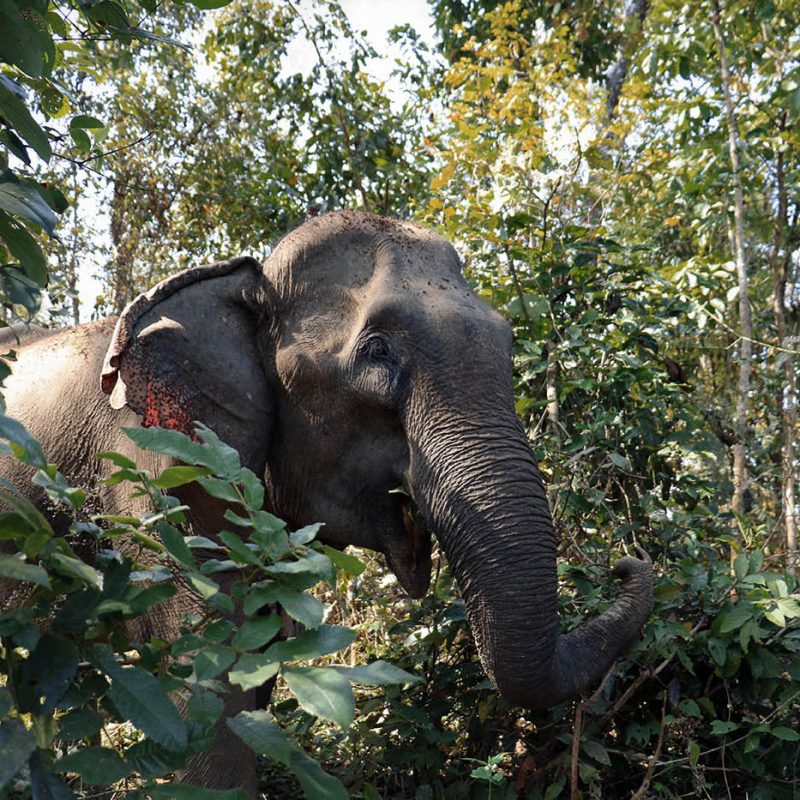 Part of the original 13 elephants rescued by the Laos prime minister, Mae Khoun Noy was saved from an illegal circus trade. Given her talent for retrieving bananas out of the tallest trees, she was likely the star of the show! Luckily, she wont be used for circus tricks anymore. Mae Khoun Noy is very shy, and is having a hard time socializing with the other elephants at the park. Elephants have very complex social structures, and can even be a little "cliquey". Our hope is that the re-hearding program and enrichment time with the other elephants will help her situation. 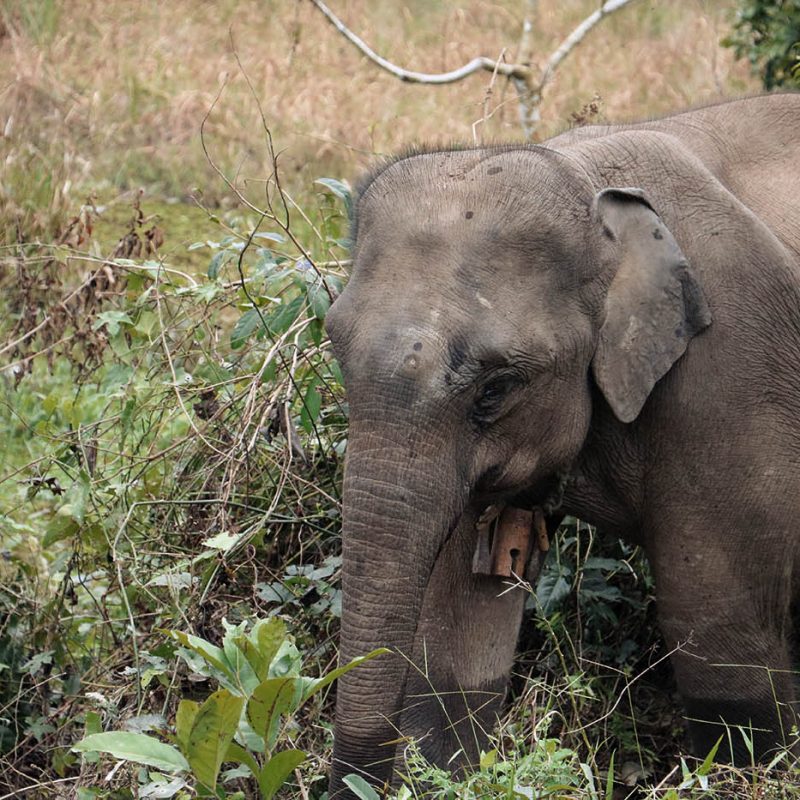 Dor Khoun Meuang is young and full of energy! He is good friends with Suriya and gets in a very pleasant mood whenever he is around. Dor Khoun Meuang is still only 925 kgs! He is apart of the original 13 as well. He loves attention from his foster family, and is commonly found exploring the jungle in his spare time. The staff here believe that he was born from a wild father. 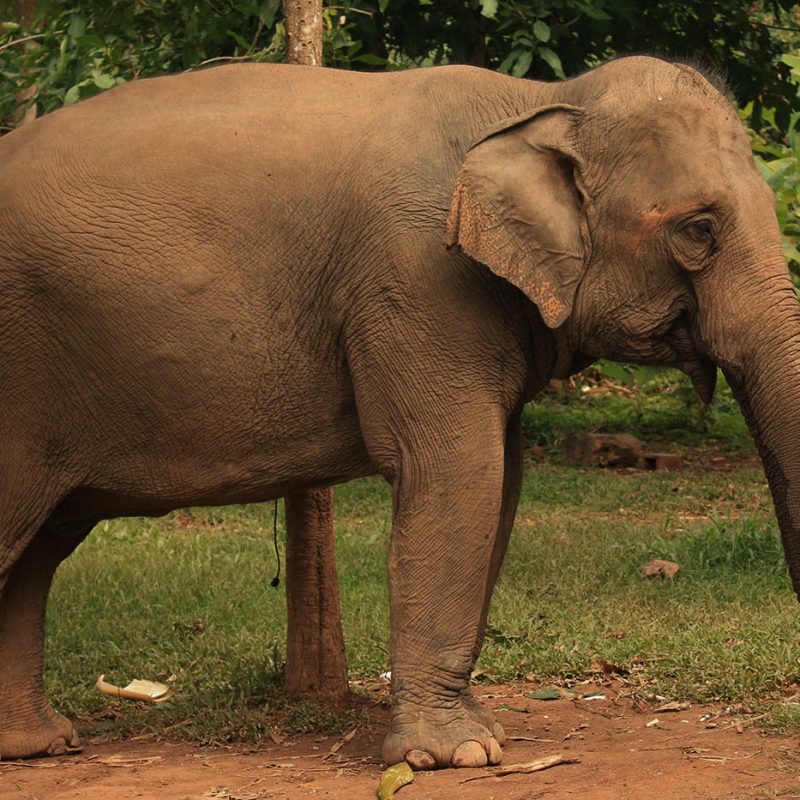 Mae Boun Nam's name means, "the real survivor". She has been through it all. At age 11 she was put to work at a village in the Hongsa District transporting tourists for forest treks-another reason we urge our customers to never support this type of eco tourism. While there, she had three pregnancies! Unfortunately, not all of them have happy endings. Her first born was a very healthy male. It was not long before he was sold in the Luang Prabang district at the age of four. Thankfully, he was picked up by the ECC and he and his mother now live happily at the center. Soon after her first birth, she became pregnant again. At some point, she escaped to eat the crops of one of the neighboring farmers. The farmer was afraid for his family, and took drastic measures by shooting her in the stomach. She healed from her wounds, but her calf did not make it. Her third pregnancy was a still born.

Though Mae Boun Nam has been through it all, she maintains a positive attitude. She is very friendly, curious, and loves to play and swim in the water. There is high hopes that she will again bring new life into this world. 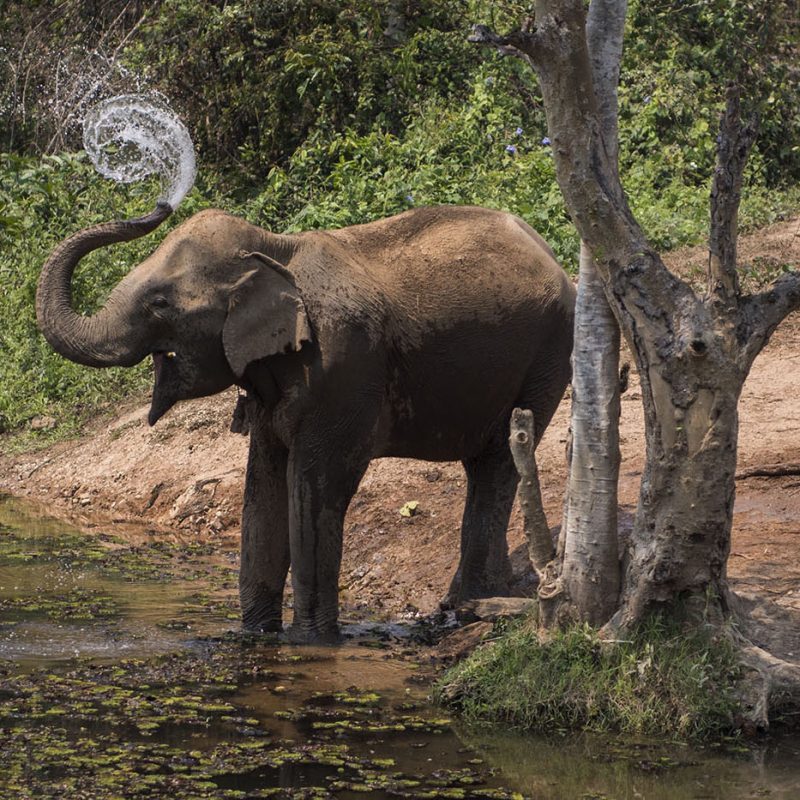 The next Matriarch! Mae Kham Ohn is still young, but the mahouts have no doubt that she will be the next herd leader. She is dominant, and likes to protect the herd. More importantly, she is expecting! She became pregnant early last year, and is due soon! Since becoming pregnant, she has not enjoyed interacting with humans other than her mahout, Mr. Bout. Mr. Bout understands her personality and has won her trust many times.

Meet the rest of the herd! There are 24 more residential elephants and over 50 wild elephants at the ECC you still need to meet! Click HERE to learn more about each of one of them!

If you just can't get a enough elephants, and you're looking for a gift card, try "iloveelephants!"